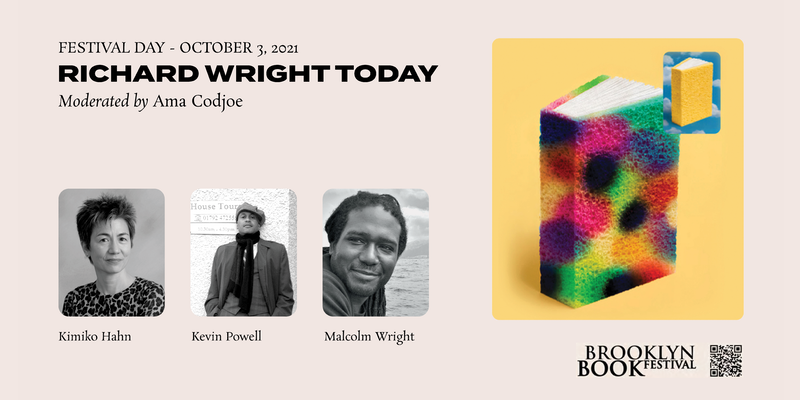 The work of Richard Wright has never felt more necessary and prescient, with the recent publication of his restored novel The Man Who Lived Underground and the launch of Seeing Into Tomorrow, a major public art project in Brooklyn featuring haiku he wrote in the last years of his life. Malcolm Wright, the author’s grandson, who wrote the afterword to the newly published novel, joins writer and activist Kevin Powell and poet Kimiko Hahn in a conversation about Wright’s poetry and prose and its relevance today. Moderated by Ama Codjoe.

Presented with Poetry Society of America and the Brooklyn Book Festival.

Ama Codjoe is the author of Blood of the Air and Bluest Nude, forthcoming in 2022 by Milkweed Press. She lives in New York City and works in social justice and the arts.

Kimiko Hahn is the author of ten books of poems, including most recently Foreign Bodies. She is a distinguished professor in the MFA Program in Creative Writing & Literary Translation at Queens College, The City University of New York.

Kevin Powell is a poet, journalist, civil and human rights activist, and author of 14 books, including When We Free the World, a new collection of essays.

Malcolm Wright is a filmmaker, writer, and conservationist and provides the afterword for The Man Who Lived Underground. He is Richard Wrights’s grandson.